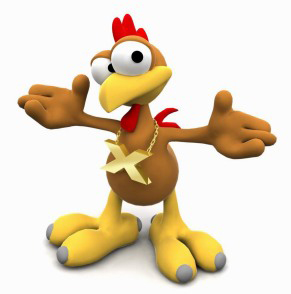 This morning I went outside with Chiqui Rikki (11 lb. Shih Tzu with the heart and fight of his trainer, a former 80 lb. Doberman) and I see that two of my youngest new family members have escaped their little fenced off area.

There they were on the other side of the yard enjoying whatever interesting morsels chickens find when they scratch about in strange new places.

And the others were pissed off, loudly cackling away to let me know they wanted their freedom, too.

I guess they didn’t think it was fair the two youngest could roam the yard free while they were stuck in captivity, albeit a rather luxurious captivity. (The Colombiana went wayyyyy overboard – and over budget – when she had the custom combination coop/condo and run designed.)

So instead of choking the chicken, I decided instead to let them ALL run free.

BTW, you DO know I would never abuse an animal, right?

I love animals. In many cases, I’d prefer to hang out with animals than people. People can really suck.

So, to reassure you… I would never abuse animals. I just wanted to use “choke my chicken” in a blog post because it amuses me.

Anyhoo… here’s the point of all this nonsensical babbling about our newest family members.

I’ve been wanting to get backyard chickens for a while now.

At least a couple years.

But I was always hesitant to pull the trigger.

How much work and time do they require?

What if they were a pain to take care of?

Would Donner kill them all? (I’m pretty sure he would have.)

Would I have the constant overwhelming desire to choke my chicken? (Ha! Got it in again. Couldn’t resist.)

Here’s the reason I FINALLY made the decision:

The guy doing the selling used the “puppy dog” close on me.

In this case, it should be called the “chicken close.”

He’ll allow me to “rent” chickens for two weeks.

If I don’t like ’em, he takes them back, keeps a small deposit and rents them (and the custom built coop/run the Colombiana designed) to somebody else.

It’s what made me FINALLY pull the trigger after “thinking about, THINKING about” getting chickens for over two years now.

John, the chicken rental guy, said he has NEVER had anybody return their chickens after the two week rental.

I guess we can’t officially call it the “puppy dog” close since we’re dealing chickens here… but you get the idea.

You should study this offer

His chicken biz has been REALLY successful. Mostly because John was smart enough to know he needed to overcome the biggest objection of selling backyard chickens to chicken rookies. Mission accomplished with a very low-risk barrier to entry.

He finds all this fun. And he turned a hobby into a business.

The pay ain’t bad, either. In fact, it pays so well… and he is so booked up with work… he is now a former archaeologist for the University of Florida.

How many of YOUR prospects and past customers
are still stuck “on the fence?”

What kind of risk-free “two-week chicken rental” offer can you make them to get them OFF the fence?

You just may be amazed at how this can completely TRANSFORM your business… practically overnight.

Gotta go. The Colombia just advised me that my breakfast of yummy eggs from free range organically raised (and EXTREMELY spoiled) chickens is waiting for me on the table.

Previous post: The Boron Letters – A Classic Now Better Than Ever