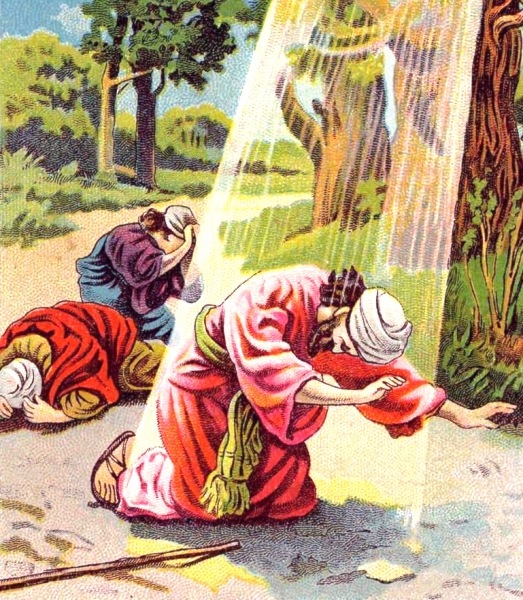 On my personal “road to Damascus”, I had a “Saul to Paul” conversion.

You don’t know who Saul is?

Judas H. Priest! You ruined my whole stick. Now it’s like explaining the punchline of a joke.

Saul of Tarsus was a Pharisee who hated followers of this new religion called Christianity.

(A Pharisee was a member of an ancient Jewish sect, distinguished by strict observance of the traditional and written law. They believed themselves to be “the chosen among the chosen” and have some kind of superior sanctity.)

Saul also despised all of L. Ron Hubbard’s fiction books… but that’s a story for another time.

Anyhoo… Saul believed he was serving God by finding Christians, throwing them into prison, and even executing them whenever possible.

He was so evil he would often strap Christians to school chairs and make them listen to him scratching his fingernails on a chalk board.

He would even sneak into their homes while they were at work and hide their TV remote control in weird places.

He would drive them crazy with sick shit like that.

As if all that wasn’t evil enough, Saul made it his life’s goal to capture and bring Christians to public trial and execution.

He was the most zealous of Christian persecutors of his time. The mere MENTION of his name caused Christians everywhere to pee their pants. (So I’m taking a little artistic license with the story. Don’t have a cow, man.)

Saul was there giving his approval when the first Christian martyr (Stephen) was killed by an angry mob.

Not being satisfied with that, after Stephen was martyred, Saul went door to door (disguised as an Avon lady) in Jerusalem looking for people who believed that Jesus was the Messiah. After selling them a big bunch of Avon products, he put ’em all in prison.

This was a dude on a mission… and he was sneaky, too!

He intercepted letters sent to all the poor bastards he imprisoned and discovered that many had Christian friends and family members in Damascus.

So, armed with arrest warrants for those folks, he headed off to Damascus to continue his his bloody mission of savagery.

But something happened on the road to Damascus.

According to his own writings, a light brighter than the midday sun suddenly engulfed him.

“Saul… Saul… DUDE! Why are you being such a dick? What did I ever do to piss you off? I must have done SOMETHING ‘cuz you continue to persecute me, Holmes!”

(Look, just because I read and study books on brain surgery doesn’t make me a brain surgeon. And it’s probably blatantly obvious I ain’t no biblical scholar either… so pipe down and cut me some slack. I’m relaying the story how I remember it.)

Saul responded, “Dude… who ARE you?”

To which the voice responded…

“You know me, yo. I’m the cat whose peeps you been persecuting and tossing in jail. And I am NOT paying all these attorney fees, bro. It’s YOUR fault so you better cough up some cash to cover these legal bills.”

Saul was in shock and frozen in place. Then the voice said…

“Look, these blood sucking attorneys are breathing down my neck. And you KNOW how these sharks are. If I don’t pay up soon, they’ll sue me for everything I own… and that’s the whole frickin’ universe for ‘me’ sake!”

While Saul made a mental note to never again smoke that pungent smelling plant the organic vegetable seller with the dreadlocks sold him, the voice continued…

“Look, dude… I’ll just have my dad pay off those blood-sucking bastards for now and then you and I can discuss how you’re gonna reimburse us. Man, I frickin’ hate those guys.

You need to go into Damascus. Hang out there for a while and I’ll get back to you soon.

And one more thing… I hope you brought a white cane.”

And just like that… BAM!… ALAKAZAM!
Saul was blind.

I have no idea how he found his way into Damascus. I like to think Donner the Doberman’s angel led him there… in between chasing all the squirrels along the way. 🙂

Anyhoo… however he got there, Saul then spent three agonizing days fasting and praying.

Finally, Ananias, a freelance copywriter in between client gigs who didn’t have anything better to do, was selected by God to carry a message to Saul.

He restored Saul’s sight and commanded him…

“Bro… you ain’t the old Saul anymore. So quit persecuting all those nice but simple Christian folks. Why don’t you travel and meet some new people instead of hanging out with all those stuffy old Pharisees and Sadducees. Maybe write a book or something.

Oh, and change your name to Paul. ‘Saul’ sounds too Jewish.”

And the rest, as they say, is history.

Look, if a heinous dude like Saul can make THAT dramatic of a transformation… what’s preventing YOU from making just about ANY kind of transformation you desire in your life, business and income?

The ONLY thing that may prevent you from that is not having the help and guidance you need.

I can help you with that here...

All the best,
Doberman Dan

P.S. I’ve transformed and reinvented myself a BUNCH of times.

Even pulled myself up by the bootstraps and went from broke, homeless and living in my 12 year old beat-to-shit Ford Taurus… to making 6-figures a MONTH… in a little less than 5 months!

Believe me… I’ve traversed the minefield you’re stuck in.

Got blown up a LOT… and I’ve got the scars to prove it.

But there’s no reason for YOU to keep stepping on mines.

Take my hand and let me guide you. I’ll get you safely to the other side… in record time.

Next post: Living there, you’ll be free… if you truly wish to be

Previous post: The BEST Ways To Reactivate Past Customers